Father Theophan's Blog
In Defense of the Undeserving Poor

Therefore, I ask you, as two gentlemen, not to play that game on me.

I'm playing straight with you.

I ain't pretending to be deserving.

Will you take advantage of a man's nature…?

It is this attitude toward the undeserving poor which is most heinous and un-Christian. Over and over, in real life and on social media, we hear calls for personal responsibility. Drug tests for welfare recipients is the most recent and most socially acceptable way to weed out those who don’t deserve help. But derogatory comments are common against people who pour money into “lowriders” and tattoos and piercings. “Why would someone waste their money on those kind of things?” “They shouldn’t get help from the government if they’re going to waste it like that.”

Although I am a priest now, and don’t have to get my hands (literally) dirty with work if I don’t want to, for most of my adult life I have worked menial, blue collar jobs. I have been a courtesy clerk at a grocery, a stocker at K-Mart, and a grease-monkey at an oil-change shop. All of these jobs were in one of the poorest counties in the United States. The vast majority of my coworkers in these positions were Hispanic and poor, the working poor.

They were mostly as intelligent as any others I have known, and they were just about as honest and hard-working as any others, and sometimes much more so. But the culture of poverty was all they knew. Their parents or grand-parents were often immigrants (sometimes illegal), and they went to work early in life to support their families.

Going to college was a luxury that was not even on their radar. They had families that needed their income. These were people who lived even less than paycheck to paycheck. Who sometimes (unwisely) used pay-day loans to make ends meet.

Poverty is inherited because it is learned from the parents. Is it because of objectively bad decisions? Often times, yes. But planning for the future, and making decisions that will make one’s future better are learned skills. Skills often lacking in the lower-income brackets.

So maybe we can excuse people for being born into poverty, and not going to school. But tattoos? Lowriders? Cigarettes? Wasting money on these things is unconscionable and should disqualify someone from receiving charity, right?

As a middle-class American, I know where I will be living next month. My rent will be paid and my land-lord will honor the lease. My apartment is relatively comfortable, has heat, water, and electricity, and if something breaks, the land-lord has it repaired quickly. I have lived in a house that I was paying a mortgage on, but life was just as comfortable and secure there.

Now imagine having to live in a place with no lease agreement, with too many people living in the same space, where mold or faulty wiring or inconsistent heat, is the only financial option. Would you have pride in your home? Would you spend your meager pay on fixing a home that is not yours and may not be your residence next month?

The attitude of the working poor can be compared to a nomadic life. Security and stability in home life is expensive and largely unknown. So they put their money into things which are portable.

While working at the oil-change shop, a coworker and I were talking about our dream cars. I don’t know what my choice was, but it was probably a car costing six figures. My friend pointed out a 1980s Cadillac. I was stunned that someone would aim so low, but then I realized that this was not a dream for him, but the best goal that he could likely achieve. Once he acquired the car, it would become a status symbol, and with no on-going payments, something that could not be taken away.

The same thought pattern can be applied to tattoos. I make sure that my living quarters are painted, that the furniture is pleasant and in good repair, and I have some art on the walls to make it look nice. But, for me, eviction is not a threat. I am not worried about mold or the roof collapsing.

My fellows in the oil-change shop did not have that security, and so some invested in tattoos. Was it a wise investment? No, but the result was, again, something that could never be taken away.

My family is not wealthy, but a few times in a normal year we will take road trips or get a new gadget, and we go out to eat more often than is financially responsible. But we can afford it. We spend money on things we like that could be used better.

Alternately, I had one coworker who was seriously contemplating filing for bankruptcy over a $1,200 debt. He just couldn’t see a way out.

I am not defending our welfare system. It is inefficient at best and abysmal and corrupt at worst. But the people at the bottom do not deserve our hatred. They do what they can with what they have while living in conditions that would horrific to middle-America.

The majority of our tax dollars do not go to help them. If they did, we all might be better off. 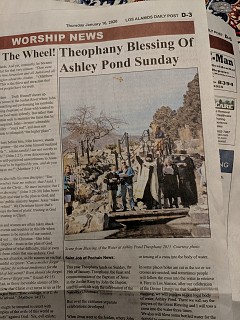 So much to do!
It’s just a garage. Moreover, it’s just a hobby. How can there be so much to do?
The wet clay and the newly thrown pots need to be kept wet, but the pots need to dry but not freeze.
The wheel and tools need to be cleaned and put away. The kiln needs to be cleaned out and
vacuumed before I fire another bisque load. Before another glaze firing, I’ll need to buy and apply kiln
wash. For that matter, I need more clay and glazes. Pots that have been bisqued wait to be glazed.
And right now it’s cold. Oh so cold in the garage.
I’ve moved inside and been concentrating on painting icons for a while. I had to crate up an icon to
ship to Iowa. Thankfully, it made it there in one piece.
My wife calls all of this (in her head) her room; all the things she keeps in mind that need to be done.
It’s truly funny how little our two “rooms” overlap. She has the girls, their clothes, girls scouts and
cookies, the house, the laundry, friendships, church, ad infinitum. I have the family in my head in a
more general way, the faithful of the church and their problems, the Art in Public Places Board, Saint
Sophia Seminary and its students, and then the rest of my room is a jumble of all my little projects,
potter, iconography, woodworking, building, bits of wire and scrap wood. It’s all there, but I try to filter
them into a hallway where I take on the next thing in order.
I take the next thing in order, and focus only on that one thing, only at my best.
Most of the time, I can feel the cloud of things pressing for my attention, looming in the periphery of
my consciousness.
At my worst Master Yoda chides me, “All his life has he looked away... to the future, to the horizon.
Never his mind on where he was. Hmm? What he was doing.”
If we cannot put away or at least quiet the impending future, we cannot be effective in the present
moment.
Projects poorly done are one thing, but people can feel it when we are not present with them. When
we hold our smartphone or have it on the table while we are talking, or worse when we let a call or a
text or an email interrupt an IRL conversation. Our lack of contact during the past year should make
real conversations that much more precious to us.
The future is full of possibilities, potential, opportunities. Some will contain disappointment and pain,
but even those can result in growth, but whatever the future holds or demands, don’t let it usurp
today’s joy.
Today is the only day we really have; this moment is the only moment.
Do the next right thing and let the mess and chaos of the future sort itself out when it comes.